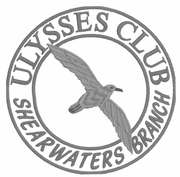 A Brief History  by Marie Polley

In 1994 the only Ulysses club branch was Melbourne. All rides started and finished in Dandenong or further north. Ray Rhodes together with Rex Davie and Hugh Sutton who were relatively new members of the Ulysses club quickly became dissatisfied with the long distances associated with participation in activities with the Melbourne branch. Ray Rhodes suggested that they form a group on Phillip Island but as numbers were limited, they decided to include Frankston, South Gippsland and the Mornington Peninsula. Ray Rhodes, who had been a member for a long time, knew Bob Tate the President of the Melbourne Branch and he initiated discussion with him about their idea to form a new group.

The aim was to have a riders group to service the south-eastern area of Melbourne and the Gippsland area with Tooradin the central starting point and the “Shearwater or Mutton Bird” as the emblem. The Shearwater is a migratory bird that flies from Siberia mid October each year to breed on the coastal area of the two lakes, and returns to Siberia mid February. Our founding members felt that the bird represented the touring aspirations and symbol of freedom, which we all associate with motorcycling and the Mutton-bird tag, suited their vintage. Our logo with a black tailed Shearwater bird flying from the Mornington Peninsula and Phillip Island to our ride departure point at Tooradin was drawn that way to comply with Ulysses Natcom’s request to have an area to focus on for the group.

Bob was supportive and helpful, although their original idea was to form a sub-group of the Melbourne branch, which would operate by publishing our ride calendar in their branch newsletter. The intention to form a group and the notice of “expressions of interest” meeting were published in the Melbourne newsletter “Spare Tyre” in the July-December 1994 issue. “We are holding an inaugural meeting of Ulysses members who are interested in forming a riding group from the area in riding distance of Tooradin or Koo-Wee-Rup. We have organized a meeting at the Koo-Wee-Rup hotel on 10 July 1994. The hotel lounge will open at 12 noon and it is proposed that the meeting commence at 2.00pm. A standard bar type meal will be available, or if sufficient members require, a roast dinner will be provided at a reasonable cost. The meeting is to ascertain if the interest for such a riding group exists, organize a meeting venue, ride leaders and any office bearers as may be required for the running of such a group”.

The first official meeting was held on the 4-10-94 at the Tooradin Hotel with an adjournment for dinner at the Tooradin Sports Club. Twelve people were in attendance. Ray Rhodes declined nomination for president and Hugh Sutton was elected as the foundation president. Rex Davie was elected as secretary-treasurer, Rolf Van Der Schaaf as ride co-ordinator and 2 committee members being Ken Page and Dave Roberts.

The first ride calendar was published in Riding On no 45 December 1994. The first ride was to the Port Welshpool Hotel. There were 28 people including Bob Tate President of the Melbourne branch. The first newsletter was published in December 1994. Hugh Sutton wrote, “The most important ingredient for the success of the Shearwaters group is your support and attendance at club rides and activities. Keep turning up, voice your opinions and ideas and help us make the Shearwaters the most enjoyable and therefore the most successful Ulysses Club branch in the country”.

Social nights were held at the Koo-Wee-Rup hotel on the first Wednesday of the month until June 1995 when it was changed to the 2nd Wednesday of the month. In January 1996 due to expanding numbers a move was made to the Tooradin Sports Club, chosen because it would appeal to the wider South Eastern suburbs as a genuine alternative to Melbourne. We outgrew Tooradin and moved to Amstel Golf Club in Cranbourne, again moved this time to La Porchetta’s in Cranbourne and after a short stay we were again looking for a new venue, this time the Cranbourne RSL welcomed us with open arms. We moved back to Amstel in March 2018 and then across to Ranfurlie for 15 months until Dec 2019 while Amstel underwent renovations. We still meet on the 2nd Wednesday of the month, (7:30 approx meeting start time). In February 2020 after the renovations were completed at Amstel, we were forced to move once again by the head chef, and this time to Trios Sports Club in Cranbourne. This did mean that we had to alter our meeting nights so we are now sometimes on the 2nd Wednesday and sometimes on the 3rd Wednesday of the month to fit in with Trios's other function commitments.

The first committee decided to hold a raffle on every ride. At the lunch stop the ride leader was to ask the publican to donate a bottle of wine as the prize. Rex said this worked and soon he had about $20, enough to post out newsletters and buy raffle books to generate the next $20. We now take up to $400 from generous Shearwaters at social nights. We celebrated our first birthday as a group in August 1995 and the first A.G.M. was held on Wednesday 13th September 1995 at the Koo-Wee-Rup hotel.

Since then we have had so many dedicated people working on committee achieving amazing results. Rex Davie wrote “our club was one of the few genuine touring clubs in 1994. We had access to some of the best motorcycling roads in South Gippsland and we made sure that we rode them all. Feedback from the other clubs was that we rode too far and too fast and would never be a sustainable Ulysses group.” Boy did that prove to be wrong! Membership peaked around the 250 mark for a few years around 2010, but has been in steady decline since as members move away or drift away from riding. With our orange t-shirts we are still instantly recognizable at national Rally & A.G.M’s.

Thanks to all those people over the years who have helped to make all of this possible. Now let’s look forward to the future and many years of riding, friendship & fun.